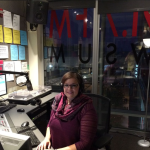 Who is Grandma Cyd?

Get to know the voice behind the show, featured in the Wisconsin State Journal in October 2015.

Grandma Cyd discovered her love of radio as a student at UW-Madison in 2001.

Many years ago, while alphabetizing her CD collection (yup), Grandma Cyd came upon a realization: There were no radio stations in the Madison, WI area that still broadcast the timeless melodies of Frank Sinatra, Dean Martin, and many of her favorite artists. And this, she thought, was a tragedy. She felt compelled to share this musical beauty with the masses. Thus, The Heavy Petting Zoo was born in June 2005.

Why The Heavy Petting Zoo?

Let’s be honest, you wouldn’t give it a chance if it were called something like That Big Band Show, would you? With its catchy title, the more appropriate subtitle, and its longstanding presence on WSUM’s Saturday night line-up, The Heavy Petting Zoo has developed a loyal following in Madison, as well as across the country, thanks to WSUM’s live online stream!

It was just a thought. Everybody sucks face on Saturday nights, right?

When the show began, its timeslot was only an hour long, so Grandma Cyd would play non-stop ballads and love songs from long ago. It was a way to live up to the Heavy Petting Zoo moniker. When WSUM’s program director asked Grandma Cyd if she’d like to do a two-hour show, she expanded her playlist. Now the show is billed as “Make-out Music and More from the 1930s-1950s.” No romance required to listen. Just kick back and enjoy!

Some HPZ trivia for you: