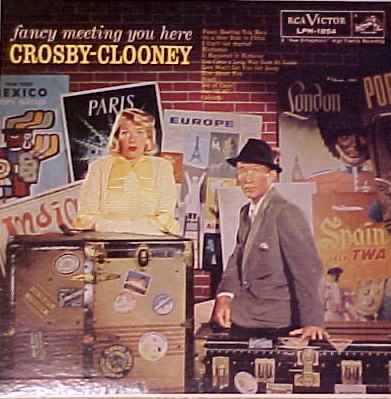 Fans of the Heavy Petting Zoo know that I have a special place in my heart for Rosemary Clooney. My friends know this too (how could they not?), and upon a recent stop in Chicago, two good friends surprised me with some finds from a local record resale shop. Among the treasures was Fancy Meeting You Here — an entire LP of duets recorded by Rosemary Clooney and her White Christmas co-star, Bing Crosby.

In her autobiography, Girl Singer, Clooney writes about how Fancy Meeting You Here was her favorite recording project of her entire career. Recorded in 1958, Clooney was six months pregnant with her fourth child when she stepped into the studio with Crosby.

Crosby, not at all pregnant, still suffered from the occasional mood swing. According to Clooney, when guests entered the control room during their recording session, Crosby turned his back to the glass and stared at the wall. Clooney approached and asked what was the matter.

Crosby responded, “I want those people out of the control room, and then I want a sandwich.”

Well, however cranky Crosby was, we cannot tell by listening to this fun collection of travel-themed ditties. On this record, you’ll find what are arguably some of the catchiest arrangements of a few of the well-known songs that made their way to the charts in the 1940s and 1950s.

Clooney and Crosby deliver a rendition of “On A Slow Boat To China” that blows anything the Andrews Sisters ever did right out of the Pacific. The number begins on a hyper note, but as it advances to the first verse, the song becomes a delicate vocal dance. The occasional stereotypical musical theme meant to depict the Orient, which today wouldn’t be considered politically correct, is a bit unfortunate.

Other quality tracks include memorable (and beautiful) arrangements of…

The orchestra supporting Crosby and Clooney is headed by Billy May (not to be confused with now-deceased TV pitchman Billy Mayes of OxyClean).

The liner notes alone are a selling point for this record. Written by Bing Crosby, you’ll learn his thoughts on the music within the album, as well as his thoughts on American society at the time. Even if he might’ve been expressing his thoughts with his tongue in cheek, it sounds like he truly didn’t have high opinions of young people at the time, nor their ability to read.

It’s likely these liner notes are unavailable nowadays unless you find the original LP version of Fancy Meeting You Here in a Dig ‘n’ Save somewhere. And that is too bad. Nevertheless, you can find this album on iTunes, if you so desire, and that means you can probably find the CD on sites like Amazon and half.com, too.

So what are you waiting for?  It’s time to cha-cha-cha… in Monterey!