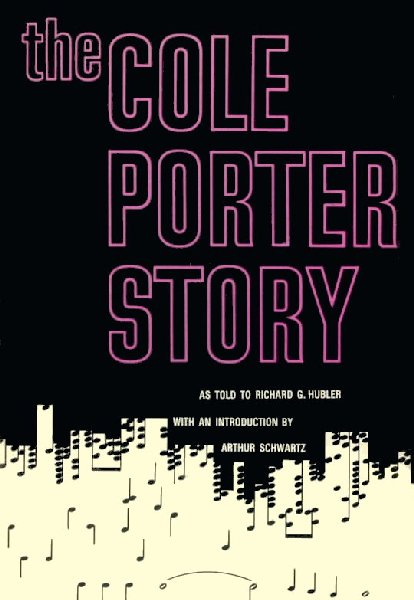 For years, a copy of The Cole Porter Story, as told to Richard G. Hubler, has been tucked away on the bookshelf of the headboard of my grandma’s guest bed upstairs.  It appears to be stolen from a library, but hey, I never said my grandma was a saint, okay?

Though written by Hubler, the book is technically an autobiography, with biographical appendices filling the latter half.  According to Hubler, this is the story of Porter’s life straight from the horse’s mouth.  Per a mutual agreement during the creation of the manuscript, it remained unpublished and locked away until Porter’s death.  Sounds juicy, no?

Alas… This is 1965 we’re talking about.  Undoubtedly, our measure of controversy has changed since then, but I suppose Porter wouldn’t have wanted to mar our image of the soft-spoken, mild-mannered Fred Astaire with accounts of his backstage feuds prior to the opening of The Gay Divorce, for example.  It’s much easier to arrange for someone else to drop these alleged bombshells after you’re not around to deal with the backlash (note to you future autobiographers).

So rather than expecting any controversy, the reader should be satisfied to hear Porter speak of his approach to composing.  He reports, “I must make a bow to the French, who taught me to use the extra phrase in music and to lighten my writing; to the English, who gave me relatively little except the warning never to speed up a tune for the sake of jazz.  It was Africa that gave me basic beats, Bali that taught me the value of changing tempos and keys.  Italy supplied the idea of pure melody, and Egypt the Oriental scale.”  And he goes on.

Porter also identifies for us his two favorite compositions:  Night and Day (really, Cole? Even Astaire complained about that song), composed while in Germany; and Begin the Beguine ( Hat Tip: Artie Shaw ), inspired by a war-dance chant he heard in the East Indies.

And while Cole Porter’s legacy lives on as a result of his surplus of standard hits, we hear of the repeated failures and rejections he faced early on in his career.  In 1931, after spending three months on a 20-song score (not identified by name in the book), he received news that the show wouldn’t go on — a new cigarette tax scared their production’s tobacco industry sponsor to pull out of the show.  And let’s not forget that songs like Love For Sale were banned from TV and Radio due to their lyrics and subject matter.  Coincidentally, a quick search of this site shows that “Love For Sale” has only been played once on the Heavy Petting Zoo.

Autobiographies are often an interesting way to learn about other people besides the main subject of the book.  Porter describes his impressions of Astaire, Danny Kaye, and Ethel Merman (“She had a voice like a trombone and a manner as ingratiating as a performance of a three-ring circus.”), to name a few.

Rosemary Clooney wrote in her autobiography, Girl Singer, that she once sang Porter’s song, “Don’t Fence Me In,” at a concert late in her career.  After the show, a fan approached her and exclaimed, “I never knew Cole Porter was a feminist!”  It’s possible that one could interpret the closing lyrics of the Bing Crosby/Andrews Sisters version of “Don’t Fence Me In,” for example, as a shout-out to feminism — “Papa, don’t you fence me in.”  Likewise if a solo female sang it proudly.  But in fact, according to Porter, the song really had no deep meaning whatsoever.  He bought the lyrics for $200 from a cowhand, “wrote the tune with [his] cheek stuffed with tongue,” and employed every Western cliche he could think of.  Nevertheless, it’s one of my favorites.

While autobiographies have their merits, this book provides one good example of an autobiography’s disadvantage.  When one is writing about oneself, how credible can the information be?  Some stories get exaggerated and other facts are suppressed.

Anybody who’s read anything objectively researched and reported about Porter knows of his homosexual liaisons, but you’d never know about them if your research began and ended with The Cole Porter Story.  Instead, we get to know Porter as a man deeply in love with his wife, devastated when she passes away.  While there’s no reason to disbelieve this as fact, there’s clearly more to the real Cole Porter story.

You can’t blame him for remaining guarded, though:  That’s a pretty big bombshell to drop in 1965, even for a dead guy.