Longtime listeners of The Heavy Petting Zoo know very well the amount of admiration I have for Dick Van Dyke. Some might even recall the 48-hour weekend jaunt my mom and I took to Fort Worth, Texas just to see Dick and Jerry Van Dyke in a live on-stage performance of “The Sunshine Boys.” (Thanks again to Special K for hosting HPZ that weekend!) 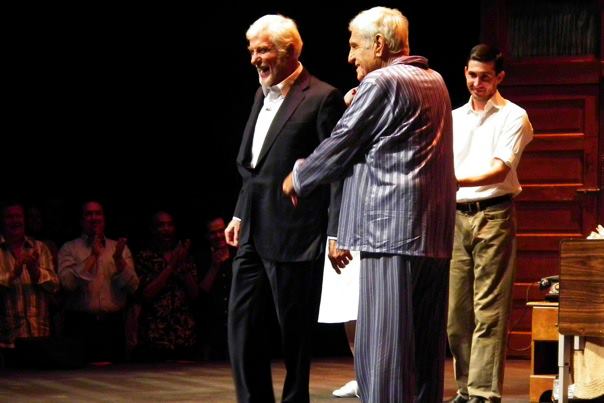 Having had an online home for my radio show since 2009, one might wonder, “Why haven’t you written about Dick Van Dyke yet?”  The obvious answer is, “Dick Van Dyke was not a legendary artist of the 1930s-1950s.” But the truth is HPZ occasionally dips into the 1960s, and Dick Van Dyke is undoubtedly one of the biggest icons of the decade.

As he accepts his Lifetime Achievement Award from the Screen Actors Guild tonight, I thought it would be appropriate to highlight a favorite from my record collection: Songs I Like by Dick Van Dyke.

Some of Dick Van Dyke’s career milestones seem to have a strange synchronicity with John F. Kennedy’s life. For example, the pilot episode of The Dick Van Dyke Show was shot on JFK’s Inauguration Day (January 21, 1961). And this album, Songs I Like, was recorded the same night as JFK’s assassination (November 22, 1963). Van Dyke said in an interview with TV Land that it was all they could do to get through the recording session as it had been an emotional day for everybody.

Despite knowing the historical context of the recording, it’s impossible to detect that Van Dyke and his back-up singers/musicians were distraught at the time. The Ray Charles Singers and Enoch Light and His Orchestra provide the strong musical backbone behind Dick Van Dyke’s lead vocals.  The album is full of upbeat and jazzy renditions of familiar songs that generally follow this formula:

If you’re fortunate enough to get your hands on the original LP release, be sure to take a look at the liner notes inside the album. Comedy legend and The Dick Van Dyke Show creator Carl Reiner had this to say:

“I feel that Mr. Van Dyke’s voice belongs in the charmed circle of nonsinging singers. I include in this group Louis Armstrong, Gene Kelly, and the non-voice singer of them all, Fred Astaire.”

Indeed, you can easily spot a “nonsinging singer” on any tune that requires that “singer” to sustain a note for more than a beat or two. It’s easy for a novice to slip off the head of a note when asked to hang onto it for too long. Ballads can be particularly troublesome for “nonsinging singers.”

A few tracks on this album bring this to light for Van Dyke, who himself waves off any overly doting compliments about his singing. Simply put: He sings because he has fun doing it; any expectations set beyond that are entirely your own.

The album itself is 90% high-energy and the “nonsinging singer” matter is a non-issue. Van Dyke’s talent and knack for providing a lighthearted comedic touch is evident throughout this uplifting collection.

Among the tracks, you’ll find a jazz-style arrangement of “Put On A Happy Face,” one of Van Dyke’s most famous songs courtesy of his role in Bye Bye, Birdie. In place of an instrumental dance sequence (which doesn’t translate well through the record player), we’re treated to guitar and saxophone improv solos. Perhaps this is a nod to Van Dyke’s love of progressive jazz, as described in the album’s liner notes.

Until relatively recently, this album only existed in its original form– a Command Records LP release from 1963. I found my copy on the internet from a seller who, in my opinion, undervalued it. But the seller’s lack of appreciation was my gain. It’s one of the best $6.00 purchases I ever made.

The 2011 release of Dick Van Dyke’s autobiography, My Lucky Life In and Out of Show Business, brought with it renewed popular interest in Van Dyke’s career. Now, you can find digital releases of Songs I Like on iTunes and elsewhere (coincidentally retailing for $6.00).

If you’ve got 35 minutes at your disposal, give this album a whirl!

Recommended tracks for the dubious listener:
“Nice Work If You Can Get It”

“Put On A Happy Face”