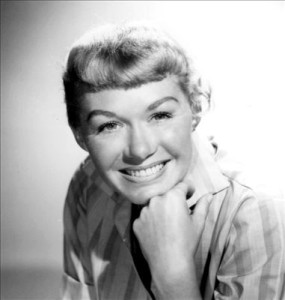 “I can’t remember my own birthday, but I’ll never forget that date.”

June Christy knew her life would never be the same. It was on that day that she officially joined Stan Kenton’s Orchestra as the girl to replace the very popular Anita O’Day.

Christy was born Shirley Luster on November 20, 1925 in Springfield, Illinois. By her teenage years, she’d already found herself singing alongside dance bands in Decatur, IL.

Her placement at the forefront of Kenton’s orchestra was the result of wishful thinking, careful planning, and calculated plotting.

She’d heard that Kenton was headed to Chicago and, more importantly, he still hadn’t found a replacement for O’Day. Since she knew he was signed with General Artists Corporation, she headed down to their Chicago headquarters and waited in the lobby hoping he might walk in.

As luck would have it, he did stop into GAC, and she seized the opportunity to hand him a demo of her voice. According to Christy, Kenton took a listen and invited her to sing along with them for a few days, just to try it out. 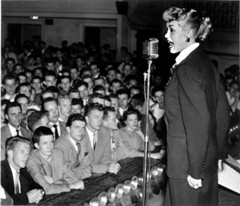 As the new voice of Stan Kenton’s Orchestra, many hoped June Christy would bring a softer, more tender style to a band that was criticized for being too stiff and intellectual. Anita O’Day herself once said, “the band is so cerebral, you can’t dance to it.”

Despite the desire for a refreshing contrast, many hear similarities between O’Day and Christy after all. Here’s O’Day singing “The Man I Love” and Christy singing “Sweet Lorraine” — take a listen and see what you think.

Some also criticized Christy for being cold, citing her lack of vibrato as one trait that left something to be desired in vocal personality. This was one criticism with which Christy staunchly disagreed.

“Tampico” was Kenton and Christy’s #1 hit. Following that was Kenton’s own arrangement of “It’s Been A Long Long Time.”

Kenton was also the mastermind of the song called “June Christy,” whereupon Christy, ironically, doesn’t sing any actual words. Adding to that irony, the scat — traditionally known to be improvised singing style — was all pre-written. What more can we expect from a band not known to be very loosey-goosey?

Almost as soon as Christy signed on with Kenton’s orchestra (March 1945), she began laying the groundwork for a solo career, recording under her own name for Capitol Records (December 1945). She collaborated with Kenton arranger Pete Rugolo, mostly working together on singles from 1949-1955.

Christy’s sound evolved with the times, but she never earned certain accolades like “groundbreaking” or “revolutionary.” She went from “straight-laced big band girl singer” to “straight-laced solo cool jazz singer” (see below, where we reflect on this point just a bit).

Her singles and albums weren’t anticipated to be popularly received at the time, but with the advent of “concept albums,” like Sinatra’s Only the Lonely and Swing Along With Me, there was new-found demand for records that could convey a narrative arc from start to finish.

For Christy, that meant albums like Something Cool and Fair and Warmer were born, as well as two that were orchestrated by her husband, Bob Cooper, whom she met when they were both performing with Kenton’s orchestra. Those albums were June’s Got Rhythm and Ballads For Night People.

To hear this turnabout in style, check out:

To shake things up a little bit, Christy reinvigorated some traditionally slower songs with upbeat and swinging arrangements. “I Want To Be Happy” is just one example (here’s the Doris Day version of the song to give you a sense of what previous arrangements sounded like).

Eventually, the record industry shifted away from this “intimate swing” musical style. As demand decreased, Christy found herself among big names (like Sinatra) trying to find other work. By the mid-1960s, Christy was reported to suffer greatly from anxiety, and scotch was her medication of choice. She died on June 21, 1990 at the age of 64.

A Note from Grandma Cyd

The announcement of June Christy as our featured artist came after a wee bit of suspenseful build-up on HPZ social media. Ultimately, I fully expected public reaction to the final unveiling to measure only conservatively on the “Excite-O-Meter.”

Allow me to illustrate. Perhaps your reaction to June Christy ranges from…

If you feel this way, that is okay!

You see, June Christy is so… normal. Mainstream. Predictable. Would you go so far as to say “bland”?

After a listener suggested that June Christy be a featured artist on HPZ, I tried pretty hard to find the right words to explain why she was, in fact, a worthy choice. I came up with nothing.

When at a loss for words to articulate what’s special about an artist, I sometimes turn to jazz critics who might offer perspective. This time, I turned to one of the most thorough reference books in my personal library, and I must say… I walked a way feeling a bit vindicated.

“I doubt there’s anyone reading this who has spent more time listening to Christy than I have… Yet I confess that all my intense concentration has led me to naught. Asked to explain why she’s so good, and why her recordings are so worthy of attention, I still can’t provide an easy answer.”

So here we sit. Our lack of eloquence is in no way a reflection on her worthiness as an artist. For me, it’s the smoky timbre of her voice that draws me in. If you’d asked me four years ago, I would have told you that June Christy is barely on my radar. But recently falling in love with Johnny Hartman’s style turned me into a likely fan of the late Christy sound.

The great thing about June Christy is that she has something to offer for everybody, whether you prefer the big band hits of the mid-1940s or the sultry, jazzier sounds of the mid- to late-1950s.

Pick a spot in her career, dig in, and enjoy!