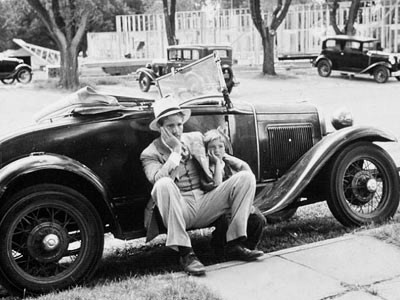 It’s a vastly underrepresented musical era, yet – in my view – it is one of the most enjoyable: the music of the late 1920s and early 1930s. Perhaps part of the reason we don’t hear this music anywhere is because it’s difficult to find (and/or remaster) music that was once only available on scratchy cylinders. But once you get your grubby hands on these vintage gems, there’s something inherently pleasing and relaxing about hearing music as though it were playing straight from a Victrola. It takes us back to what seems like a simpler time, even though at the height of the Great Depression, it’s a sure thing nothing was simple.

A great one-stop shop for a diverse array of old timey (and I mean OLD timey) tunes is The Paper Moon Soundtrack. In this 15-song collection, we hear a mix of ear-catching tunes that sometimes turn morose or macabre.

Country singer Jimmie Davis is here. Old time radio star Dick Powell (“Richard Diamond”) takes us down Flirtation Walk. A young Bing Crosby tries to whistle his way back to an old flame’s heart. Hoagy Carmichael’s inability to sing in key makes us wonder if we really want to keep Georgia on our minds. And if you ever hoped to hear a solemn but forthright account of one’s gruesome murder of a pretty young girl, then the Blue Sky Boys surely deliver.

While I could (and do) listen to this LP repeatedly when I need a pick-me-up, there is a snag for you, dear reader. Until this year, the soundtrack hasn’t been available since its original release in 1973, and it still isn’t all that easy to find. I even scoured the depths of Google to find an image of the cover art to share with you but had to settle for another image from the movie itself. However, another look at the interwebs tells me the soundtrack has just been reissued on CD.  And it appears those who go on to purchase the CD reissue will be treated to 11 remastered bonus tracks by Django Reinhardt and the Quintet of the Hot Club France!

Below, I’ve provided links to some websites that claim to be able to hook you up with a copy of the soundtrack. And while I prefer that you enjoy this soundtrack on vinyl — the way this music was meant to be heard — I must admit it’s a bit of an inconvenience to have to flip the record over again and again when you haven’t had enough.

Front to back: This soundtrack is 100% enjoyable — no disappointing selections whatsoever! It’s the perfect way to dip your feet into the early 1930s.

Since you may only be toying with the idea of diving into this music, I offer the title/artist track information. From here, I invite you to explore the single recordings and expand your musical taste based on what suits your fancy. After all, this soundtrack is what led me to discover the Heavy Petting Zoo theme song, Petting In the Park by Dick Powell!

1. “It’s Only A Paper Moon” by Paul Whiteman & His Orchestra

2. “About A Quarter To Nine” by Ozzie Nelson & His Orchestra

3. “(It Will Have To Do) Until the Real Thing Comes Along” by Leo Reisman & His Orchestra (Larry Stewart, vocal)

6. “One Hour With You” by Jimmie Grier & His Orchestra (Donald Novis, vocal)

7. “I Found A Million Dollar Baby” by Victor Young & His Orchestra with the Boswell Sisters

8. “The Object Of My Affection” by Jimmie Grier & His Orchestra (Pinky Tomlin, vocal)

9. “Georgia On My Mind” by Hoagy Carmichael

10. “A Picture Of Me Without You” by Paul Whiteman & His Orchestra (Ken Darby and Ramona, vocals)

13. “After You’ve Gone” by Tommy Dorsey & His Orchestra

14. “Let’s Have Another Cup Of Coffee” by Enric Madriguera & His Hotel Biltmore Orchestra

To read more about the Paper Moon soundtrack, check out this blog by Boombox Serenade for a thorough take on it.

CD reissue of the Paper Moon Soundtrack – available at MovieGrooves.com